This colossal church has three naves dates from the early sixteenth century, when it was built to replace a much more modest temple. Work on the church began in the early sixteenth century under the direction of architect Juan de Aguirre and ended in 1580. The uniqueness of this construction is that it has no tower since it was demolished during the shelling to which he was subjected in the contests Chartists of the 1830s and partially destroyed the building. Its main altar is chaired by the altarpiece of the Adoration of the Magi, from the former parish of Santa Maria de los Reyes Caudilla depopulated. 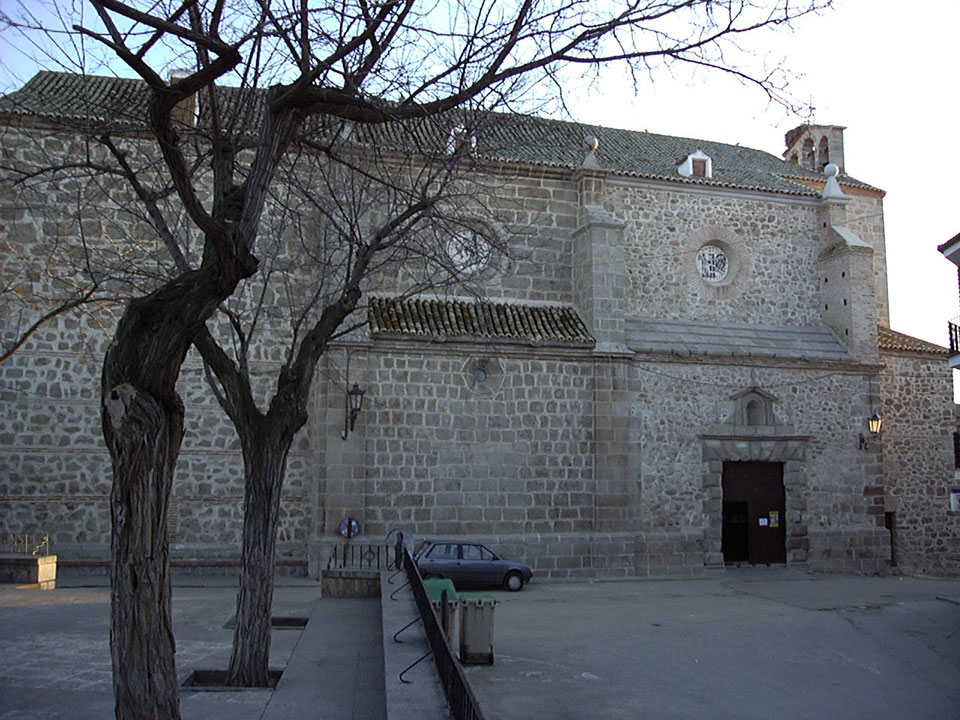 This is one of the areas of archaeological Menasalbas prevention. It consists of a set of two fields abundant ceramic material modern times west of the city center.
Ermita de San Sebastian

The patron saint of the town, San Sebastián, has in the suburbs with a simple chapel of a single rectangular nave and wooden deck, which keeps the image of the Holy Sepulchre. Its construction, which probably dates from the late eighteenth century, has undergone various vicissitudes over the centuries and now only retains the transept of what initially was a Latin cross. The patron saint of epidemics has been the most revered in the city since time immemorial.

It has four eyes rectangular board romboidiales rests on four pillars of granite blocks with slight curvature at the top built with large slabs of granite in one piece. The paved entrance and exit of the bridge is still preserved.
tombs

Near the swamp Torcón amid the Royal Gorge, it is a necropolis of about thirty anthropomorphic tombs carved into the granite rock, which are very accessible and easy to visit. Tourists may also visit the necropolis of Malamoneda or Peña Aguilera, which could be related to the first settlers of the twelfth century. Jumela On the way, we can find other tombs, tombs called Moro. As the above they are carved directly on a granite outcrop.

The medieval depopulated Jumela, whose origins date back to the twelfth century, is one of the oldest towns in the region, which had finally deserted in the early nineteenth century. It had more than 500 inhabitants in the time of Philip II, there is now more than the image of his temple or church ruins, which draws attention to the tower with its skylights shaped loopholes, which gives it a look of strength and the four walls of the nave, which was attached the priest's house. Very near here both Chalcolithic sites of the Iron Age, Roman, late Roman and medieval and modern are located.

The museum was created in 1990 with input from neighbors. It offers a large collection of tools, objects and tools, commonly used in pre-industrial agrarian society of the town to allow a visual tour of each of the facets of traditional rural life: grazing, agriculture, social life, home, commerce and crafts, evoking lifestyles and habits not very distant in time.

Data of interest of Menasalbas