Starting from Toledo by the CM-401 road, about 13 kilometers take the exit to take us to a village steeped in history, Guadamur. This villa is structured around the axis of the Calle del Prado, former "Wadi", perpendicular to it, the street of Toledo and the confuencia of both Recesvinto Square, center of town where we find the City the Rollo of Justice of the sixteenth century and the Church of St. Marìa Magdalena.

The parish church dates from the sixteenth century, however presents renovations made in the nineteenth and twentieth centuries. It is rectangular with three naves separated by horseshoe arches on brick pillars naves and is built with Toledo rig. Stresses inside the chapel of the Christ of the Piedad, also its beautiful coffered Mudejar and Visigoth reliefs houses in both pillars of the epistle and gospel.

Following Toledo Street, almost on the outskirts of the town, we find the Hermitage of San Antón, the sixteenth-century building, a rectangular building with beautiful cover of arch masonry. Today It houses the Museum of Arts and Popular Traditions of the Montes de Toledo (Visiting hours Monday, Wednesday and Friday from 10.30 to 13:30. Saturdays from 10-14 and 16-19 h. And Sundays from 10.15 to 13.15 h.), with an interesting collection of handicrafts, useful, playgrounds, school supplies and agricultural tools, in addition to the recreation of an old kitchen, symbols of a culture and way of life on the road extinction. Most of the items have been donated by residents of the municipality and the region.

Uptown and located in an old school we find the Interpretation Centre Treasury Guarrazar (Visiting hours Monday, Wednesday and Friday from 10.30 to 13:30. Saturdays from 10-14 and 16-19 h . and Sundays from 10.15 to 13.15 h), in it we see the importance of the Visigoth period in Spain and more specifically everything concerning Guarrazar archaeological site where the famous treasure was found in 1858. It has diverse archaeological materials, models and explanation of the latest excavations, which highlight the importance of the place during the last centuries of Visigoths. Undoubtedly the star of the center is the splendid play much Treasury Guarrazar, including two royal crowns, the Reccesuinth and Suintila, the latter is a difficult play to see since the original was stolen from the armory Real in 1921. A media room with interesting documentaries, known to us very clearly, those centuries as crucial for the formation of Spain.

Very close to the center of interpretation, we can see the famous Castle Guadamur, located on the hill of the Nativity. This imposing building dominates the whole village that extends to its feet. It was built in 1468 by Don Pedro Lopez de Ayala in a first phase in which the pit, the Barbican, the palace the first body and the keep were built, all with a character clearly of strength. At least two other extensions and reconstructions give it the appearance it has today.

They visited and lived in the castle, among others, Queen Juana, Felipe I "the Handsome" and Cardinal Cisneros. He suffered a slow decline since the mid eighteenth century until 1890, when it was restored by the Count of Assault, who lived in it with his family. This nineteenth-century restoration will endow interesting frescoes, coffered ceilings, fireplaces and windows of medieval style that still retains.

Next to the castle, we find the Shrine of Our Lady of the Nativity, is the oldest building in the town, located on the hill of the same name. Mudejar, possibly dating from the second half of the thirteenth century. Inside is venerated Our Lady of the Nativity icon on canvas representing the Virgin Niña and Santa Ana, in the upper corners two angels in prayer, the bottom of the box imitates mosaic, the current icon is a copy of the original. 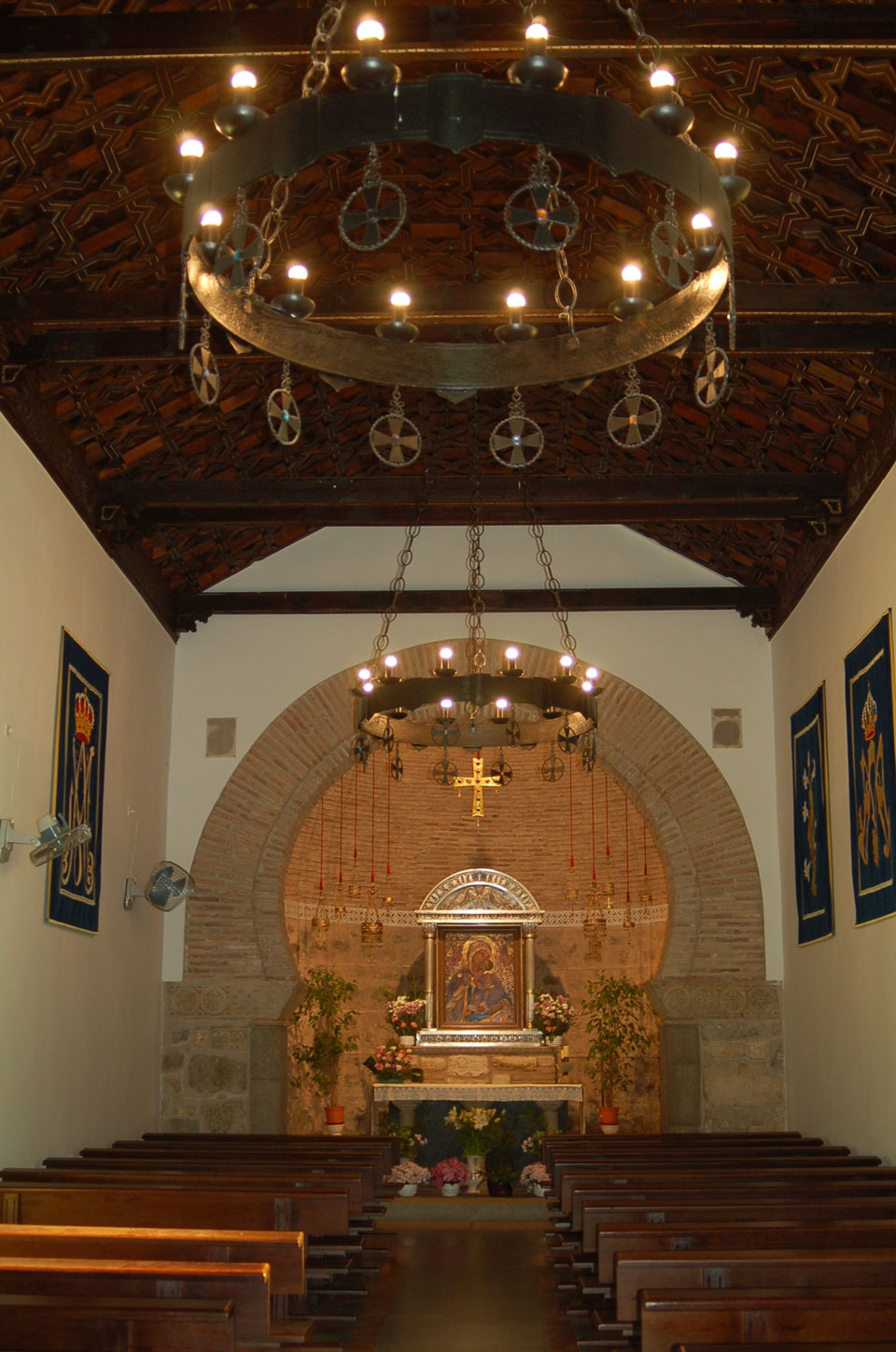 Interior of the Chapel of Our Lady of the Nativity.