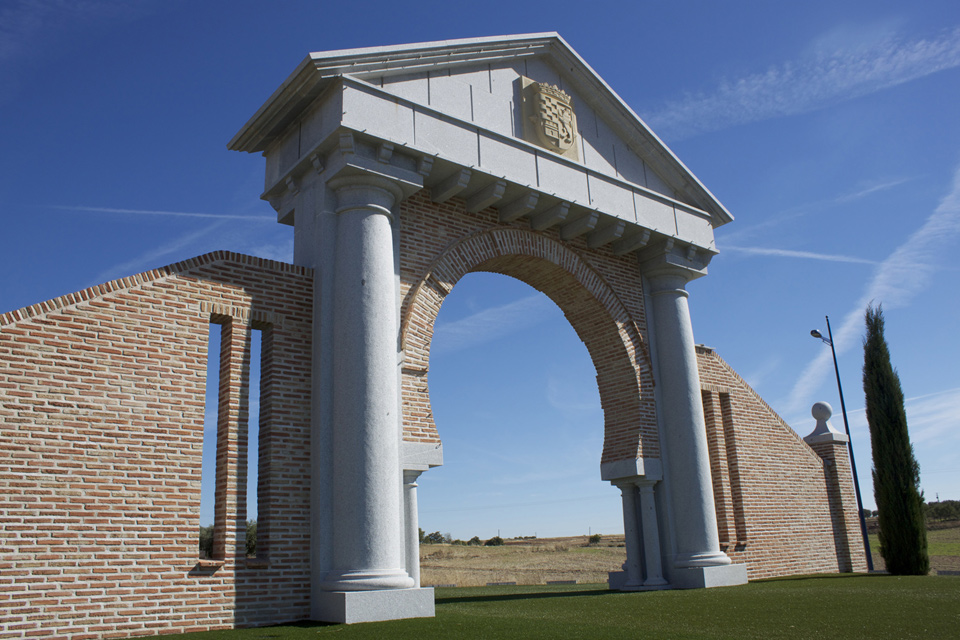 The municipality of Gálvez is located southwest of the Imperial City, about 30 kilometers following the CM-401.

To determine the origins of Galvez, we must go back to prehistory. Cores that start, they are focused on Torcón Alpuébrega river and ancient human settlement that is mentioned as a town for the first time in a document of the Middle Ages. This area was ideal for the stable life, he had water and very fertile valleys, where the remains of Iberian ceramics, the oldest in the area and fragments of the Bronze Age.

Alpuébrega left the inhabitants of those valleys and down towards the vast plains in search of farmland, creating a new town, Galvez, where the remains that testify to its antiquity.

There are details that show the Roman life in Galvez. The appearance in the bricks, amphorae, a capital, a stele, coins ... reveals the Hispanic-Roman origin of this population. For the old Alpuébrega, located on the right bank of the stream passed a secondary Roman road which connected Toledo with Merida. The first written mention of the remains of Roman origin in terms of the town is the fourteenth century.

The villa was head of the Lordship of the Suárez de Toledo, whose house are still remains, preserved one of the towers of what was once a palace or Casa Fuerte, and this is where the tour of the city begins.

Next to the Casa Fuerte is the Church of San Juan Bautista. Temple of the XVI century, consists of a rectangular three naves of Moorish style. It emphasizes the bell tower with blocks of granite plinth. On the bell tower octagonal body rises with arches and covered eight waters. The chancel, the transept and the aisles are prominently apilastradas cornice eighteenth century.

In this square we find houses of the XVI-XVII century manor house Tercia House, both of popular baroque style.

We headed to the City Hall and City Hall. It is a baroque building built in the eighteenth century, consisting of two floors with portico of Doric columns and continuous balcony. The building is remarkable in its bare paneled Plenary Hall.

Continuing the visit we can see the building in which once housed the Old Esculas. Dating from 1903, composed of three fronts with two floors and windows arch. Against its front facade of Justice Roll up, it is the only Gothic roll of the Shire of Montes de Toledo.

It is important to note that the municipality was a Jewish quarter with synagogue, documented in the fourteenth and fifteenth centuries, when the latter disappeared Jewish community by decree of Ferdinand and Isabella in 1492. It is the only known and documented mosque in Montes Toledo.

The tour of the village ends at the Shrine of Our Lady of Sorrows, also known as Christs. It is a three-nave chapel made of masonry and rigging Toledo, whose facade is topped by a belfry with a single arch made of brick where a bell is located. The coffered ceiling is decorated with Greek crosses and eight-petalled fores.

About 4 kilometers from the town are the remains of a castle. Nothing is known about the history of it, but presumably had to be built around the XIII century and abandoned in the sixteenth century. Apparently there was a settlement around. 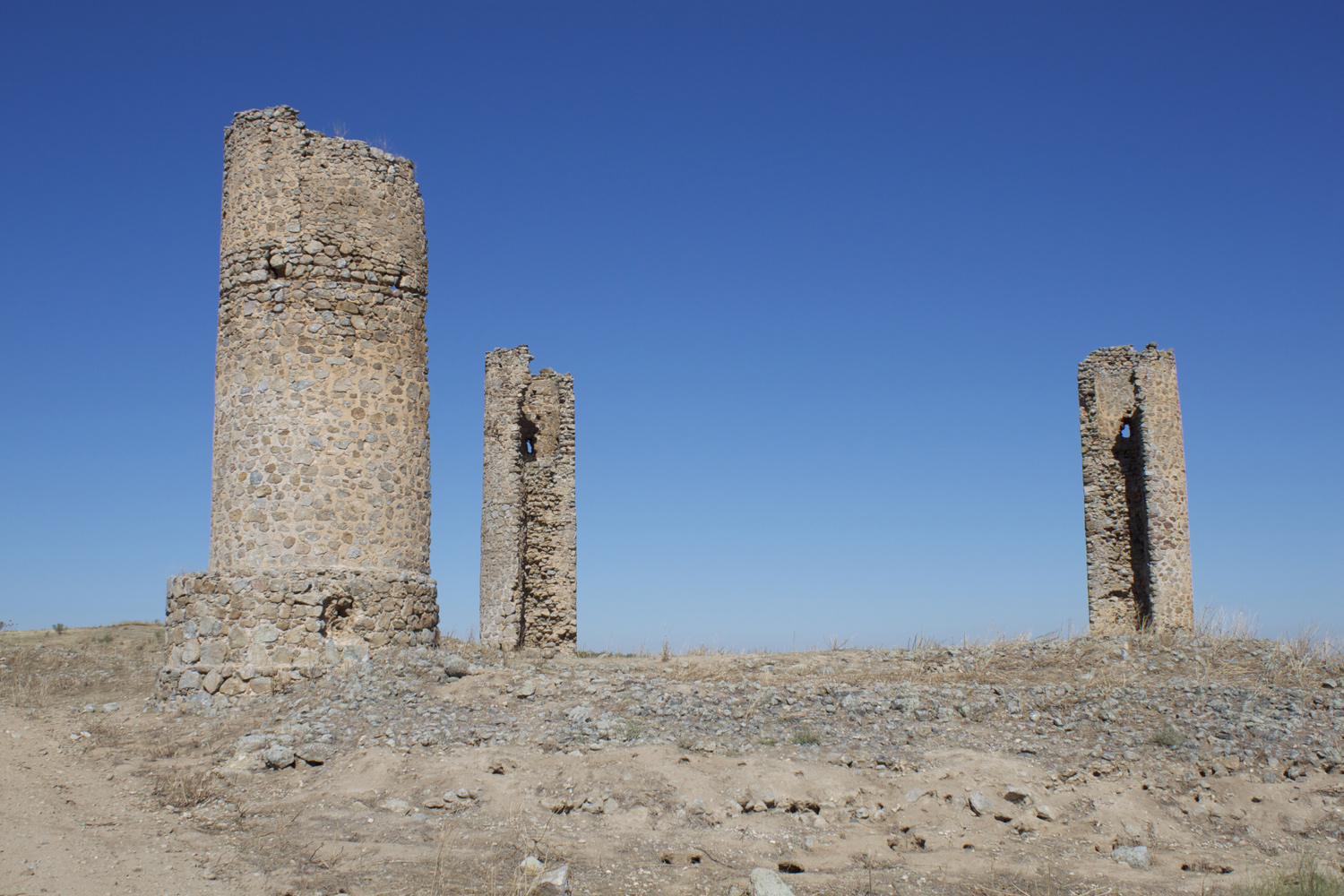 Galvez castle was square, but only three of the four towers that had at its corners. The towers crowning lack and preserve some loopholes. Lacking today of the wall, and at the sight of three isolated towers known to the ruins of the fortress by the name of Los Castillos. Actually, the de Galvez had to be a very similar to Peñafor castle in Crow, although abandoned and therefore worse preserved, but recognizable.

On the outskirts, north of the town, we found a Aqueduct of the early twentieth century, made of masonry and concrete arches, with corners marked with stones. 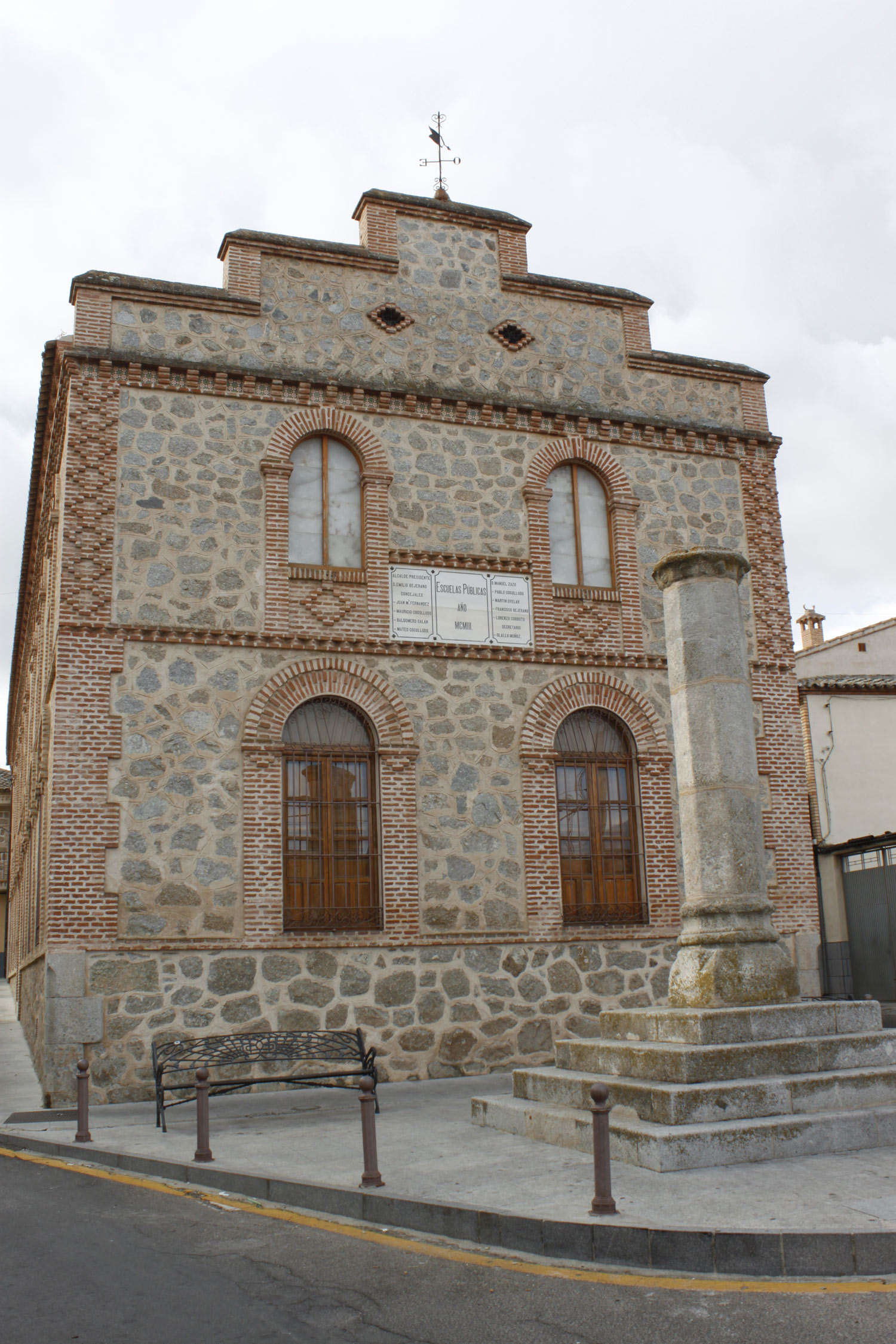 Building 1903, three fronts with two floors and a partition wall , which now houses the Municipal Theatre- Auditorium . On the upper floor , the windows are also semicircular but somewhat smaller than the lower , with marked fascia and simple decor.
Forming the front corner window consists of two lower and two similar higher than the side walls , further having the upper railings decorated with neomudéjar brick geometry. In this facing separates the bottom of the upper cornices with denticles formed by staggered rows of bricks , including ceramic having geometric patterns. Top, topped with a stepped gable with two ventilation holes of the attic in the center.

Galvez has traditionally been a people dedicated to agricultural and craft activities. Stand dedicated to pig farms and monoculture of the olive tree, resulting in an important industry famous for its charcuterie, its olive oil with Designation of Origin Montes de Toledo; without forgetting the development of products such as nougat, marzipan, cakes and claret wine and artisan cheese from sheep. Due to the variety of small game they have been held several top Hunting Days of Swine and others throughout the year.

The craftsmanship of the furniture is one of the pillars of the economy galvenā, constituting a great production center furniture alder, pine, chestnut and beech.

In the town you can also visit an exhibition of forging, in which we will find gift items and pieces of ironwork of recognized quality in the province.