They say it was the emperad Trajan who built the fort. Chances are that the fortress belongs to the early days of the Reconquista. It was ceded in times of Alfonso VIII to the Sovereign Military Order of St. John of Jerusalem being head of the Grand Priory of La Mancha, and has a double line of walls, three towers, one watchtower and ada looks outside. In 1813 it was destroyed during the war dela Independencia Espafiola. In 1962 the castle as part of the confiscation of 1836 was passed into private hands, it is on loan to the municipality. It began a period of rehabilitation, withan big boost in 1985 with the creation of the Workshop School. In this castle happened the Battle of Consuegra.

Of the 13 originals are preserved 11, which are: Bolero, where you will find the tourist office and wheat moledero preserved; Mambrino, Sancho, which preserves the sixteenth century machinery used in Saffron Party; Vista Alegre; Loja dondese Cardeño an already empty house, Piggy; Sparks; Knight of the Green Coat that has numerous versions of Don Quixote; Dapple which features an exhibition of wines; Espartero; which has an exhibition of Toledo crafts; and Clavilño, photographs and furniture Andorra.

It is a Latin cross, has a dome quadrangular porticoed side access, and is built with stone and brick. The interior houses two Renaissance covers. Preside over the presbytery five paintings of artist José de Bera ton from the late seventeenth century, representing the Baptism of the Lord, San Jose, San Joaquin and the remaining two cherubim with the attributes of passion. From this period dates the remodeling dirigid to by the royal architect Don Juan de Villanueva.

Church of the Holy Christ of the True Cross

Neo-Baroque style built after works that lasted over fifty years. It is a Latin cross; It stresses its white marble facade, with a mixture of baroque and neoclassical elements. Inside is the image of Christ of the Vera Cruz, Images Easter, and a museum of religious art

A single nave temple with portico entrance. In the bottom of the apse it is a crypt-style mud ect, and factory remains rior to the temple. Inside is the ima gene Mary White and the remains of several blessed.
City Hall and the Plaza

City Hall, Renaissance style, was built in 1670. Next to this building is the clock tower. In this square, can be contemplated building "Brokers" seventeenth century with beautiful wooden balconies, typical of La Mancha, it was silo, granary and council. Currently houses the Municipal Archaeological Museum, with pieces ranging from the Neolithic to the nineteenth century. In this square, visitors also found with the building of Cordoba Diaz Foundation. 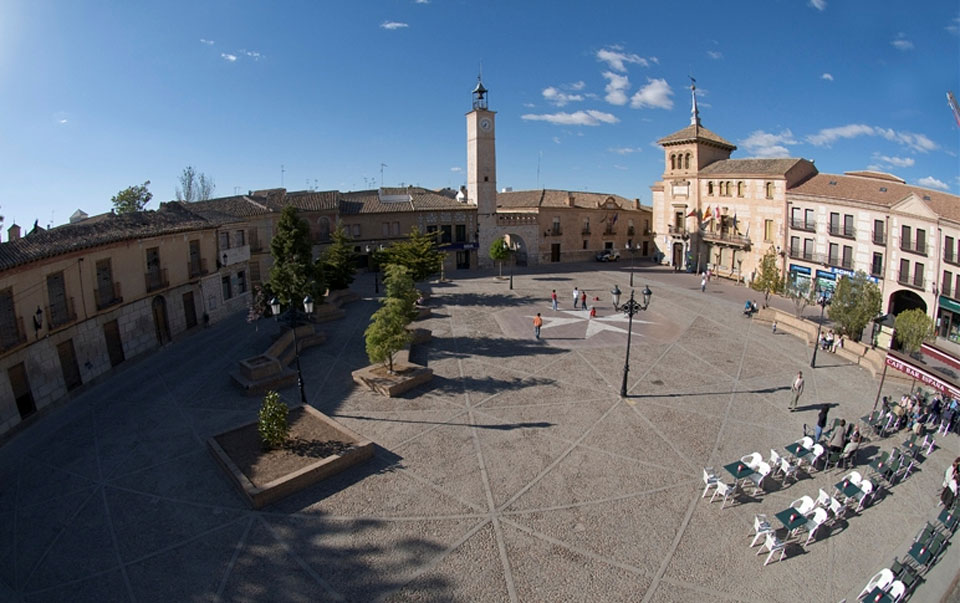 Other monuments and places of interest are the convent of the seventeenth century Francisca us, where there is currently a center for the elderly; Convent of the Discalced Carmelite Reverend Mothers of the sixteenth century, the House of Tercia or the Roman dam several kilometers from the city center, characterized by a length of 630 meters, on the Amarguillo River, the largest of the Roman dams preserved.

Data of interest of Consuegra