Declared joint historical heritage site since 1986, Toledo is, at the same time, a dynamic city, in continuous growth, University Headquarters and capital of Castilla la Mancha.

Known as the city of the three cultures, Toledo is a universal model of coexistence and tolerance of ethnicities and religions over the centuries. City dreamed and painted by the hands of the illustrious Greek, Domenico Teotocopuli, El Greco.

The first settlers must search for them in the prehistory, the strategic location of the city, located on a rock and protected by the Tagus, made that these settlements were continuous, built the first walled in celtiberian period. Conquered by Marco Fulbio Nobilior in 192 BC. Roman period we have testimonies of the great city which controlled the central area of the Iberian peninsula, today they are examples of the works of engineering, the Roman circus, the network of sewers, the remains of the aqueduct, baths, etc. During the Visigothic period it was capital of the religious political Empire.

In 711, conquered by Tarik, the city changes little by little the customs, and transforms its path through a maze, rise mosques, bathrooms, squares turn into small souqs, are reused areas of occupation, is the great Alcázar, elevated and protected by a walled Palace. In the 11th century, Toledo became an important Kingdom of Taifa, passed into Christian hands in the year 1085 with the conquest of Alfonso VI.

The King was generous with the communities living in the city. The Jewish quarter had a great commercial activity, Toledo was raising its population during the age measured, with a strong artisan and industrial activity with the coexistence of religions. At the end of the 15th century, the city is home to the most noble families of Castile, as all the Moorish palaces that now kept, during this period, time of the Catholic monarchs, meetings of courts.

In century xvi, with the Emperor Carlos I, the city becomes the center of an empire, the Alcázar renewed Italian traces, the large Primate seat Toledo archbishops, made social and cultural renaissance buildings, highlighting the work of Mendoza, Cisneros and Tavera. But from 1563, the capital moved to Madrid.

During the age of enlightenment with the with the establishment of the actual factories, the city of Castile re-emerged from its lethargy.

The city of Toledo is associated to the Toledo mountains for different reasons, here was established the headquarters since the 15th century the Brotherhood who was in charge of the protection of roads, and neighbor of this land, against honey and cattle theft, or attacks from bandits to proceedings. Such was this link unless the residents of Admiral land, they were duty-free at the doors to the city of Toledo.

The area was recreation and hunting place for Kings, the noble families of the city owned lands and castles in this geographical area, such as the Laso, López de Ayala, etc. The archbishops of Toledo, had their homes from camps.

For centuries the Montes de Toledo, they have stocked with firewood and charcoal Toledo homes being source of heat, and food from the kitchen. The Toledo cuisine, is closely related to the products of this land, excellent game meat or exquisite cheeses and oils.

The Corpus Christi in Toledo, declared of International Tourist Interest, is the most important festa of the imperial city, and one of the oldest. It is a religious procession, full of solemnity, which is headed by the Cardinal Primate of Spain.

The historic streets of Toledo are specially decorated for this brilliant parade, projecting the Custody and singular procession that accompanies it.

Blessed Juliana of Mont-Cornillon was who promoted the feast of Corpus Christi, which was instituted in 1263 by Pope Urban IV. The first procession which the news is in 1447, when Nicholas V through the streets of Rome in this festival accompanied by the Holy Host. Toledo Corpus data do not appear until the fifteenth century, and the exact date remains unknown.

The preparations begin five weeks before the date, ornamenting and travel covering the streets with lanterns, garlands and awnings for the Custody always this low canopy cover, under the supervision of "beadle" which measures the height at which They have been hung to confirm that all are willing to regulatory level and to pass the Custody.

The day before the tour adjoining streets with antique tapestries, quilts, banners and shawls on the walls, balconies and windows are decorated. Among the ornaments they wear, highlighting the seventeenth century tapestries that are used to cover the facades of the cathedral, one day they are exhibited abroad. In addition, the floor is carpeted with aromatic herbs such as lavender, thyme or lavender perfume that will contribute to the procession. 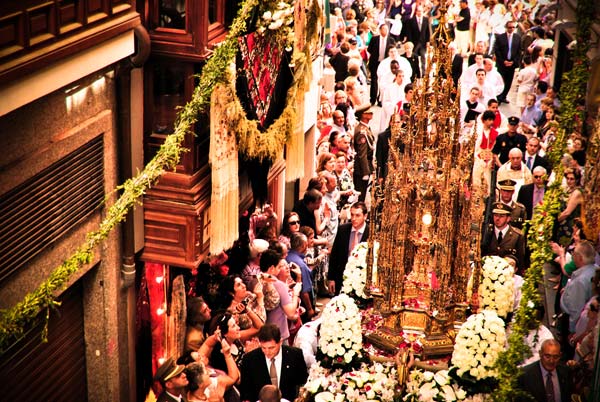 The highlight of this celebration takes place when you exit the parade procession to the midnight to cycle through the main streets of Toledo. As heralds of this parade of giant group representing the different continents and popular monster tarasca or supported above a small female figure known as Anne Boleyn appears. Such monster few years has stopped appearing, due to the lamentable state it was done.

After this singular troupe and sound of all bells Toledo, begins to leave the procession from the cathedral to tour the main streets of the city, highlighting the incredible custody, goldsmith masterpiece by Enrique de Arfe in 1515.

Rounding out the parade procession a number of fraternities with their banners on the fly as well as fraternities and chapters, among which are the Mozarabic horsemen with their blue habits, Corpus Christi , purple ; the white of the Holy Sepulchre, or the red of the Infanzones of Illescas.

The dates of this festa vary according to the liturgical calendar.