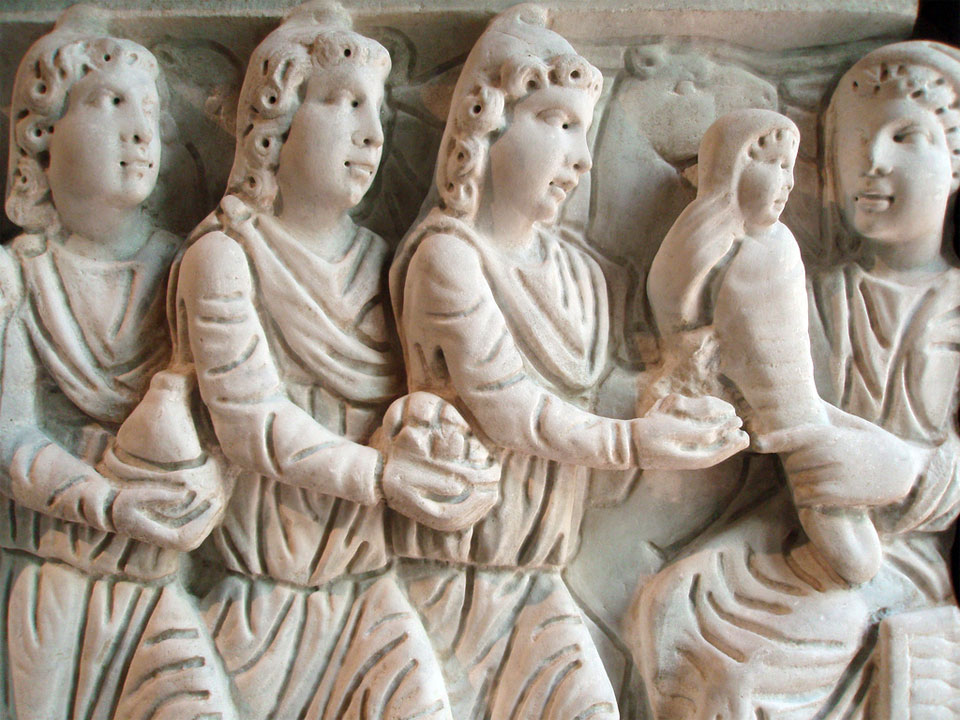 The conquest of the current Toledo territory by the Romans occurs in just 30 years , in the first half of the second century BC

Rome held a deployment of forms and new models, many administrative , economic, technical , cultural and religious affecting all Hispania , causing the transformation of existing indigenous structures and their integration into the Roman political and administrative organization .

There are several findings that show the development of the Roman world in the region of Montes de Toledo, although from the archaeological point of view are very few sites that have been excavated.

An important aspect of the Roman world is the study of the road network in the case of the present province of Toledo goes back to the late nineteenth century by authors like Coello, Blazquez, Moraleda , etc. It was from 1969 , when Corchado Soriano makes a synthesis of the Roman road network between the Tagus and Guadalquivir , forming a main and secondary road network. It will be the contribution of the classical sources as Vicarello glasses , Anonymous Ravera and, above all , the Antonine Itinerary , which provides a more detailed analysis of these roads , especially regarding route between Laminio ( Alhambra , Ciudad Real) - Toledo.

From the point of view of habitat , sources cite two types of towns: villae and cities and mansions.

About the Villae would have to say that it is population units in the field representing a system of economic exploitation of land , usually located in flood plain areas , next to a river and not far from any road or Roman road. In the region of Montes de Toledo , numerous settlements of this kind, as evidenced by the remains of ceramic material Sigillata Terra , located in almost all municipalities of the region : Ajofrín , Almonacid de Toledo, Galvez, Hontanar , Los Navalmorales , Manzaneque , Marjaliza , Mascaraque , Menasalbas , Mora , noez , Thumb, San Martin de Montalban, San Martin de Pusa , Sonseca , Totanés , Urda , Las Ventas con Peña Aguilera , Villarejo de Montalbán and Los Yébenes.

As for the cities and mansions sources cite a number of cores including Consabura is shown above in the Milky 30 Antonine Itinerary as Consabro.
It consabura be identified with the current Consuegra, where the archaeological remains exist as a Roman presence from the first moments of the conquest. The extension came to occupy this place is sketchy but the truth is that the sources speak of the former greatness of Consabura. Besides this territory it is mainly characterized by being a transportation hub, supported by the existence of two important physical agents: a witness hill (Cerro Calderico) and secondly, proximity and abundance of waterways.

So, in the town of Consuegra they have been numerous Roman remains that show the importance of this population such as: the circus (which would be located in the street with the same name), the dam, canals, Roman ponds ( you really are part of another dam), remains in the town (statues, bases, capitals, currencies, etc.) or Amarguillo numerous sites around the river.
But not only in Consuegra the presence of the Roman world are found, but in most of the municipalities that form the region.

This is the case of Layos, where we highlight two early Christian sarcophagi, which seem to belong to S. IV, ie, the early Christian art developed by the early Christian communities. The first was found in 1627 and is marbled (currently located in the Academy of History of Madrid); the second preserved only his forehead and was found after 1627 and before 1753 (it is currently in the Marés Museum of Barcelona).

Another key element in Roman times are the water piping systems, conserving numerous archaeological remains of these hydraulic devices, like the prey of Sewer and sewer system in the town of Mazarambroz, that supplied the city of Toledo.

Sewer dam is of gravity, involving the construction of a wall-gritty display various factories and a spur of land downstream. The plant dam was formed by at least two straight alignments. Located on the right bank (from the point of view inside the reservoir) are remains of 150m. In its original position, which today are attached various buildings. The other alignment is almost totally destroyed its central part in a stretch of about 180m., Being of the same s numerous fragments, some large, located, for the most part, upstream of the axis of said alignment, with a maximum height of about 20m.

In addition to these building remains, in our area of study has found various epigraphic and numismatic documents with Polan, where a funeral stele, dated by the Count of Cedillo in the second century was located - III and dedicated to AVFIDIA MONICA, deceased at fourteen, daughter LVPERCO. The same applies in Sonseca, with the discovery of several Roman coins of the second century - IV AD mainly of Trajan, and a deathly cipo with funerary inscription "VIC Bandu FLI. TES IEX VOTOTI B MEDIT." according to the German professor Géza Alfondy