Montes de Toledo / Discover / Region of the Mountains / About the region 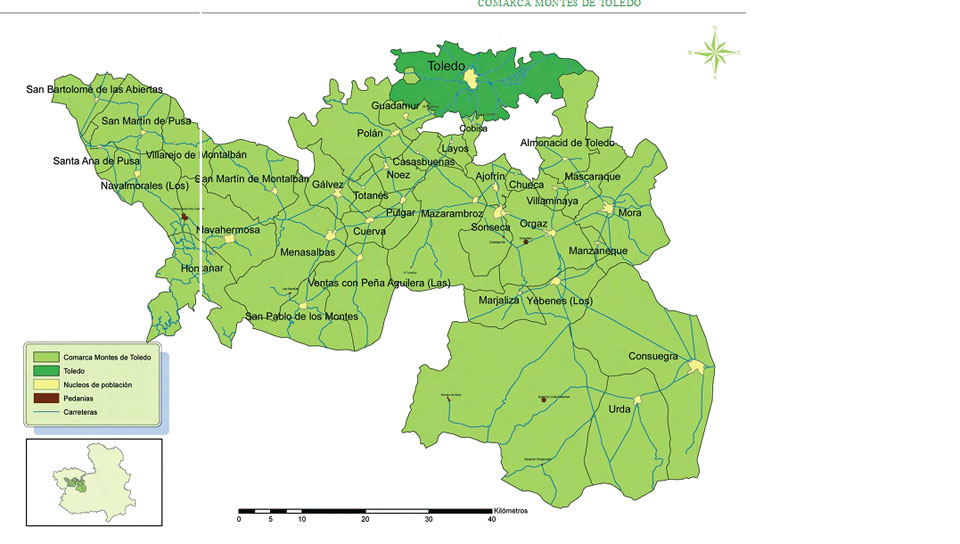 Among the regions of La Mancha and la Jara and between the Tagus and Guadiana river , there is a territory marked by a geográfcos accidents that are central-eastern alignments of Los Montes de Toledo and a plateau with the same geological origin by north extended to the Tagus river , it is the Montes de Toledo region.

Throughout history have settled different human groups which led to the formation of cultural roots based on traditions, customs, crafts, architecture, ie those elements that make up the culture of a geographical region. Romans, Visigoths and Arabs have left have left proof of their presence in buildings such as castles, bridges, churches or chapels.

From the landscape point of view characterized by the existence of quartzite outcrops of a uniform height, protruding from the surrounding vegetation, such as cistus, chaparral, oak etc ..

From the landscape point of view characterized by the existence of quartzite outcrops of a uniform height, protruding from the surrounding vegetation, such as cistus, chaparral, oak etc ..

The major rivers in the area are Algodor and Amarguillo, following them the Cedena, Torcón, Guajaraz and Pusa. The rest of the channels are streams and ravines, dry most of the year. The territory has reservoirs, such as Finisterre, Torcón I and II and Guajaraz Torcón.

All of our forests, rivers and streams contain ecosystems of high natural interest, with many species of fauna and flora whose preservation has great importance.

In the region there are natural areas of great value integrated in the Network of Protected Areas of Castilla-La Mancha. Proof of this is the ownership of part of the municipality of Hontanar Cabañeros National Park. The peat Microreserve of Valdeyernos in the town of Los Yébenes and River Reserve Sotos River Miracle in the municipalities of Retuerta del Bullaque (Ciudad Real) and Las Ventas con Peña Aguilera (Montes de Toledo District). Also noted that part of the territory of the region is integrated into the European ecological network of conservation areas of biodiversity Natura 2000 network as Special Protection Areas (SPAs) and Sites of Community Importance (SCI).
The cuisine features in this area with a rich feature and is, the presence of numerous species and agricultural dedication that has always existed in these lands have formed a typical gastronomy. So in addition to traditional dishes like ratatouille, gazpacho , crumbs , in the region of Montes Toledo is particularly important consumption of bushmeat .

They have strong presence in the region products like olive oil stands out for its Designation of Origin " Montes de Toledo Oils " , wine , cheese , saffron or marzipan ; products of this land that are known throughout Spain

Our territory to based their economy in activities such as agriculture and livestock, but in recent years has diversified economic activity towards the industrial sector (agri-food, wood, iron, textile...) crafts and services, with special recovery of the tourism sector.