Route of the Visigoths 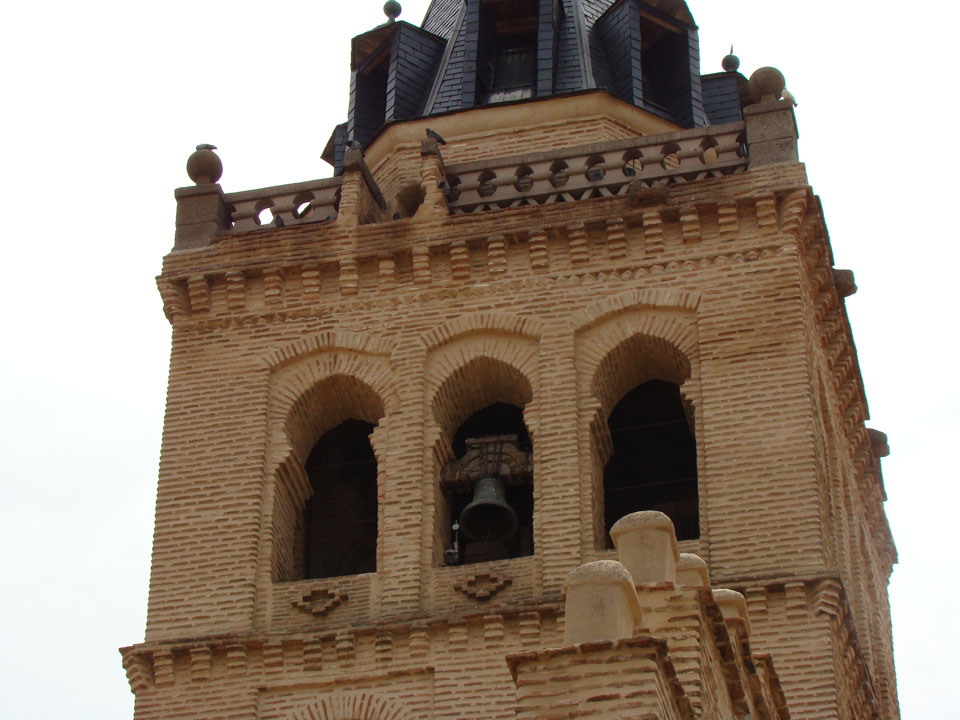 Toledo in the late sixth and early seventh century becomes the political, religious and cultural center of the Visigoth kingdom , with the conversion of Recaredo to Catholicism ( 589 ) along with all the Arian community. A stage that will give rise to the development of an independent Hispanic culture to flourish across the peninsula until the eighth century that was destroyed by the Arab invasion begins.

Toledo monasteries expand southward across the region of Montes de Toledo seeking the solitude of their places where exercise a contemplative life and study , away from the city. They sought spaces between the major roads of Roman origin, but sufficiently isolated , between the foothills of the mountains or plateau itself montena the rise of step or where the Tagus valley abandon starts. 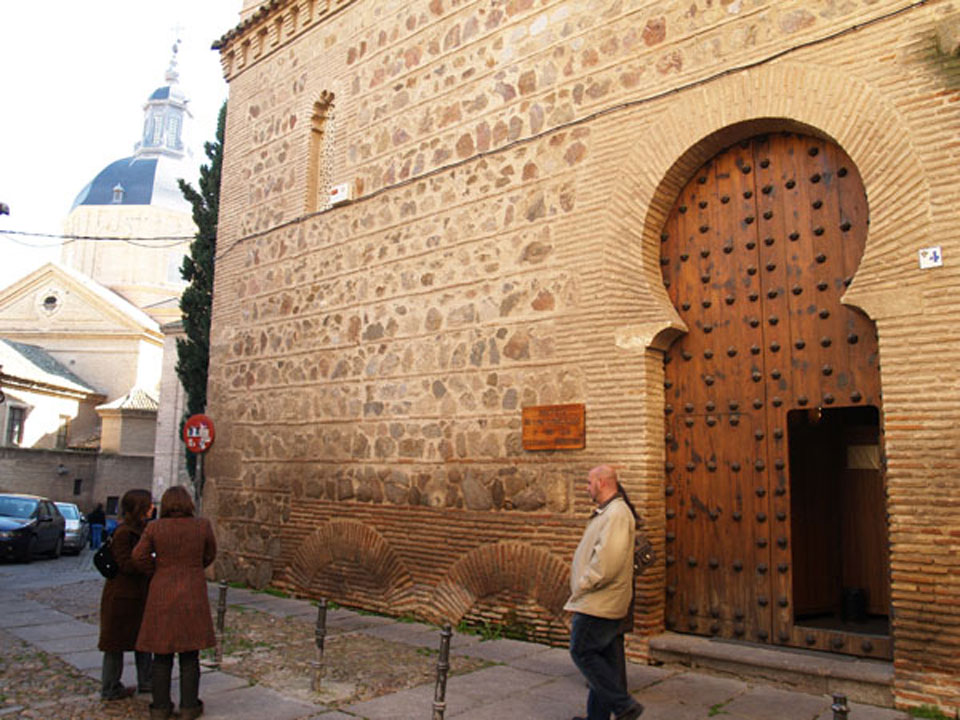 The region of the Montes de Toledo is rich in Visigoth presence. This route will help you discover the sites and places with remains of this culture together with other artistic, historical, scenic, gastronomic.

This route starts in Sonseca, where they will come from Toledo for the N-401 south to Ciudad Real. Sonseca, taking the highway TO- 7002-V seek the neighboring town of Casalgordo, distant about 4 kilometers. In this town we can visit the parish church of the Church of the Assumption, beautiful building with a Latin cross, with a magnificent coffered ceiling and a serene Renaissance tower.

Southeast of Casalgordo, are the ruins of San Pedro de la Mata, about 3.6 kilometers. On their age and origins Much it has been written, reaching regarded the theory that the chapel was early Christian church. From what we know today, the temple is Visigothic, during the reign of Wamba (678-681), of which remains are preserved in the lower walls and the structure of the building. 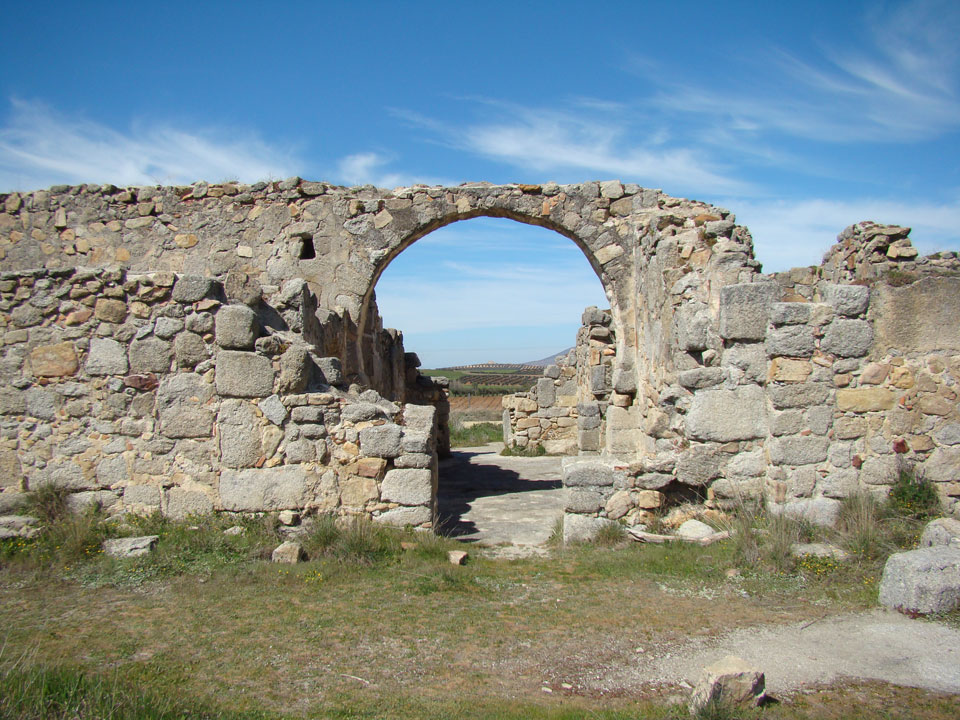 By Royal Decree of June 3, 1932 the ruins of San Pedro de la Mata, who was one of the eighty Visigoths known monuments in Spain, was declared a Historic-Artistic Monument, through the work of the Count of Cedillo.

Casalgordo and leaving on the same road about 2.5 kilometers we find Arisgotas located in an area dotted by vestiges of Visigoths settlements area. It sees its place names could mean "Oak Grove Goths". Throughout its history, farmland found numerous bas-reliefs of this culture that today are spread over houses and neighborhood courtyards. The parish church is a true example of popular architecture. Its entrance is facing south and beneath a party that is supported by two free-standing columns. The circular tower has two bodies of masonry and a third as a bulrush, and exterior decorative element visigodas five small pieces, carved in limestone, from San Pedro de la Mata, can be seen inside you can admire a polychrome coffered high beauty. 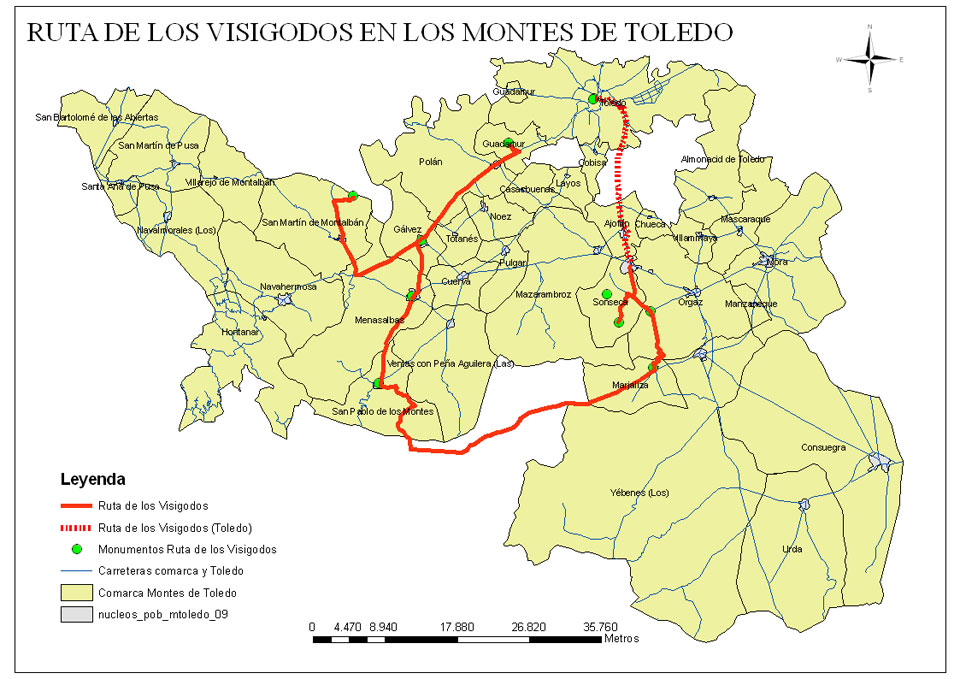 In addition some of these vestiges Visigoths and other information can be viewed in the small Museum of Art Local Visigodo found in the population.

Since Arisgotas , the TO- 7001- V road , we headed down Marjaliza , a scenic area of unquestionable beauty . This small population, documented in Roman times , has a parish church under the invocation of San Juan Bautista that compliments a chapel dedicated to Santa Quiteria , pointing to the tradition , in this town, the place of martyrdom of the saint in the century II . 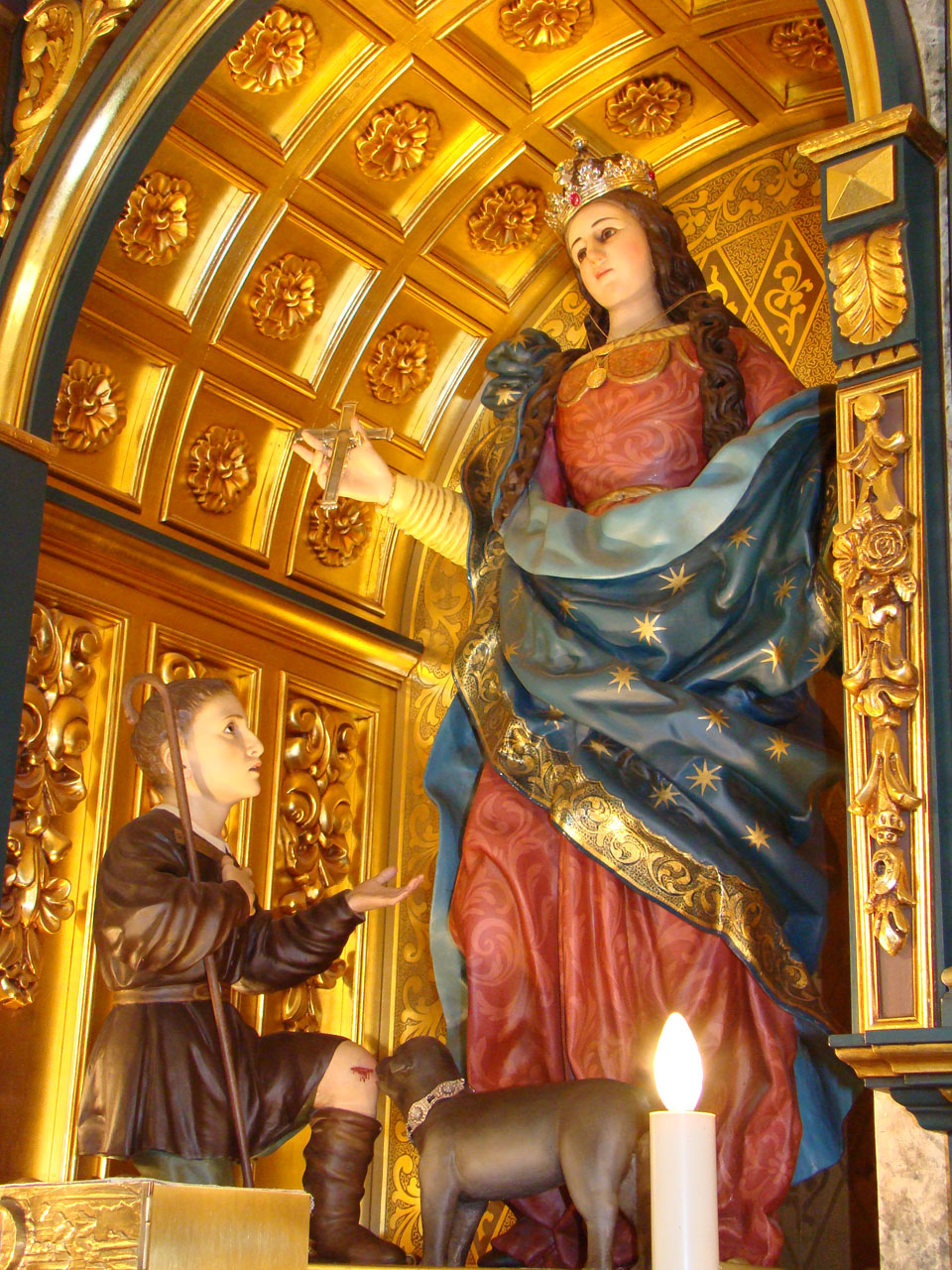 A source called Fuente Santa, along the road where we went to bathe many sick people seeking health, especially those bitten by rabid dogs and other animals.

It is considered attorney rage, why is depicted accompanied by a dog at his feet.

Marjaliza leave the CM-4017 road, and after about 22 kilometers, a large frog, come to a crossroads where we followed the signs pointing the direction of Bullaque Retuerta, which will continue for approximately 10 kilometers. At which time we will take as directed a paved country road. We continue along the narrow and winding road, where the stop is required to enjoy the splendid scenery of the Montes de Toledo, until you reach San Pablo de los Montes.

Outskirts of San Pablo de los Montes the remains of an Augustinian monastery founded in the fifteenth century built on a Visigoth building are located. The origin of this construction could be a hunting lodge used by the Toledo Visigothic seventh century aristocracy. Near these ruins we can find traces of the existence of snow pits. 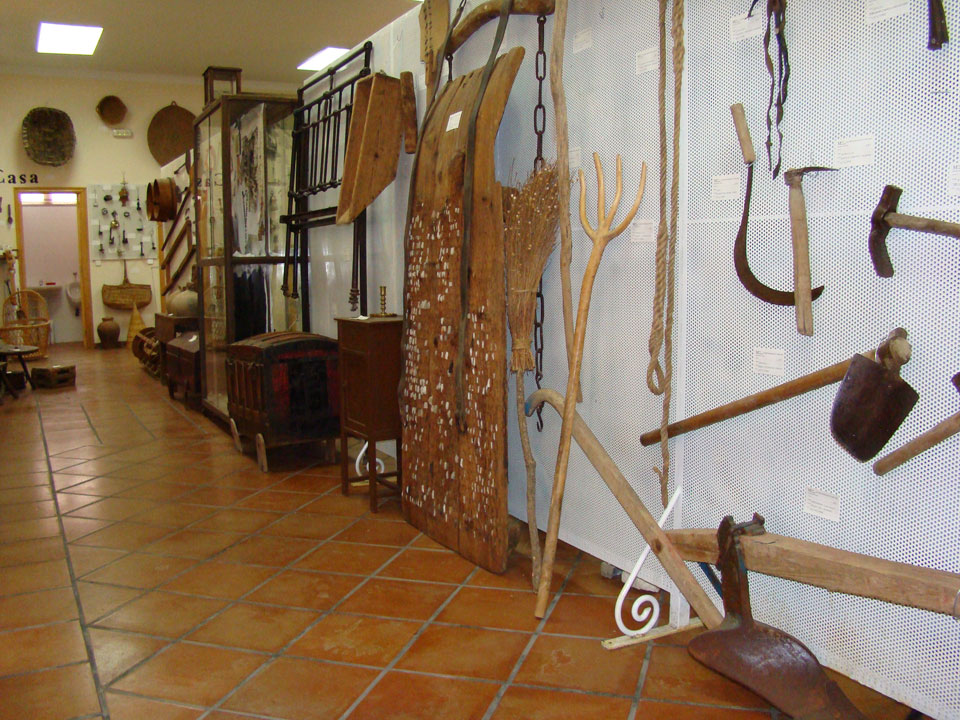 The route continues Menasalbas made where a small ethnographic museum that was created with input from neighbors, offering a large collection of tools, objects and tools commonly used in pre-industrial agrarian society of the nineteenth and twentieth centuries, allowing a tour visual for every facet of traditional peasant life, and Galvez place with new material remains Visigoths. Here is, in a private house, a pillar of limestone material in the form of rectangular prism that shows a cross carved on each of its four sides, light Visigoth, probably from Santa Maria de Melque. Today it is privately owned and can not visit.

Taking the CM-401 road, we Guadamur where you can visit the Shrine of Our Lady of the Nativity Interpretation Centre Treasury Guarrazar where we can see a reproduction of the pieces of jewelry Treasury Guarrazar and numerous pieces of Visigoth ornamentation which can also be seen inside the parish church. As it is in Guadamur you admire the bulk of its impressive fifteenth century castle and visit the Museum of Popular Arts and Traditions of the Montes de Toledo.

You can not finish this route without making special mention of the monastic complex of Santa Maria de Melque located in the land of the ancient manor of Montalban at the foot of the Montes de Toledo. 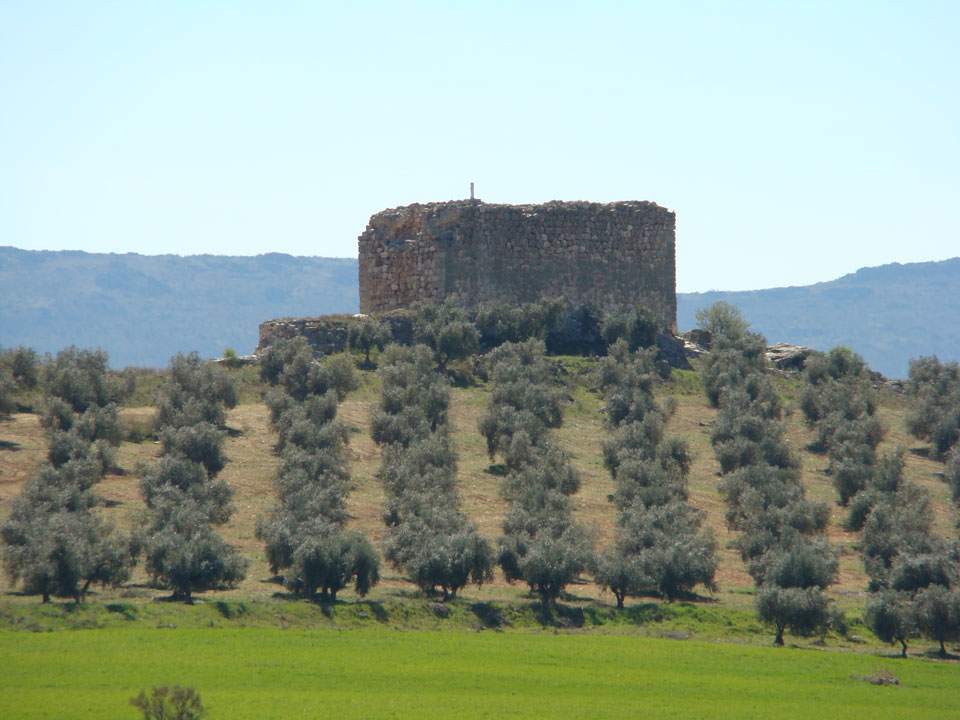 The church is the best preserved part of what was a large monastic complex of the VII -VIII centuries. The only temple for their characteristics in the reduced picture of the architecture of the Iberian Peninsula this stage , stood at the center of a large courtyard formed by the various departments of a building, also of monumental character , endowed with different ships and two height , which served to house the offices of one of the few Visigothic - Mozarabic monasteries we know.

Almonacid and other villages would Totanés Visigoth presence attested by imposts and other decorative materials Visigoth clear cultural affiliation , from religious spaces . 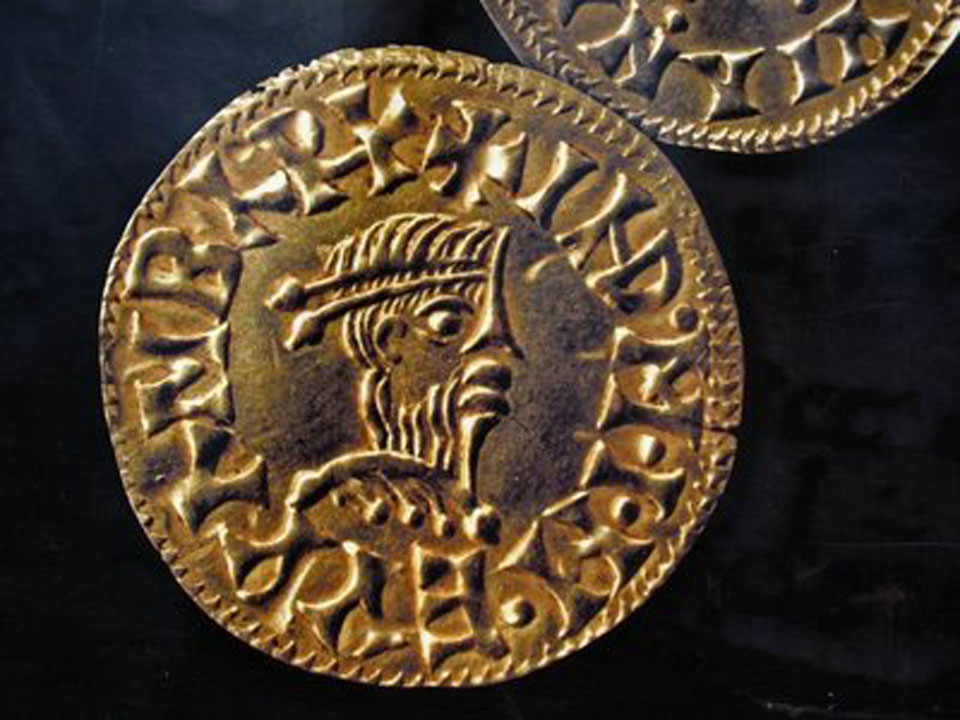