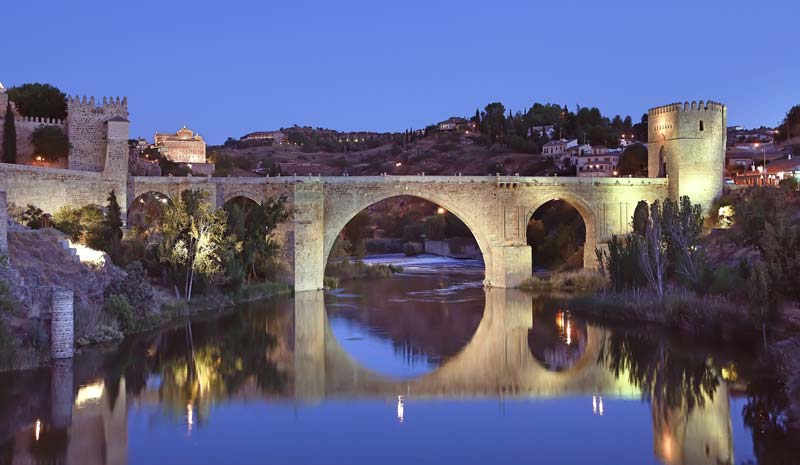 With this route called the Camino de Guadalupe Montes de Toledo is intended to inform the way that traditionally , in the act of pilgrimage , the faithful performed from Toledo to the Monastery of Our Lady of Guadalupe.

Although at present the route is mostly covered by roads, pilgrims are prepared to do it this way can deep into the municipalities by running, and get to know the wealth stored.

The route is its starting point in the city of Toledo, specifically in the San Martin Bridge, medieval bridge located in the western part of the capital from which a magnificent view of the imperial city is contemplated. It was built by Archbishop Don Pedro Tenorio in the fourteenth century, who arranged the final traces of five arches battlements and two hexagonal towers at both ends. During the reign of Charles II of Spain he was reformed, widening their access and, a century later, was paved. Both reforms is an inscription on the inside wall of the tower entrance.

From San Martin Bridge and following the CM-401 Highway, about 15 kilometers we turn and found the municipality of Guadamur, which is known its castle dating from the fifteenth century and built by Pedro Lopez de Ayala. Highlight the Interpretation Centre Treasury Guarrazar, which Guarrazar Treasury replicas are; the Museum of Arts and Popular Customs of the Montes de Toledo located in the old chapel of San Antonio Abad; Parish Church St. Mary Magdalene and the Chapel of Our Lady of the Nativity.

Returning to the path for the CM -401 , we find the city of Polan , from the Latin " settlement " . In his visit , the twelfth century castle which are preserved only some scraps of cloth wall and the two towers ; the Church of San Pedro and San Pablo , reviewing that inside stores a "Pieta " by Luis de Morales; Ermita de San Sebastian and historic mansions, the Bejerano House nineteenth century , the House of Columns, with a cover of the seventeenth century and the Golden House of XIX and XX. 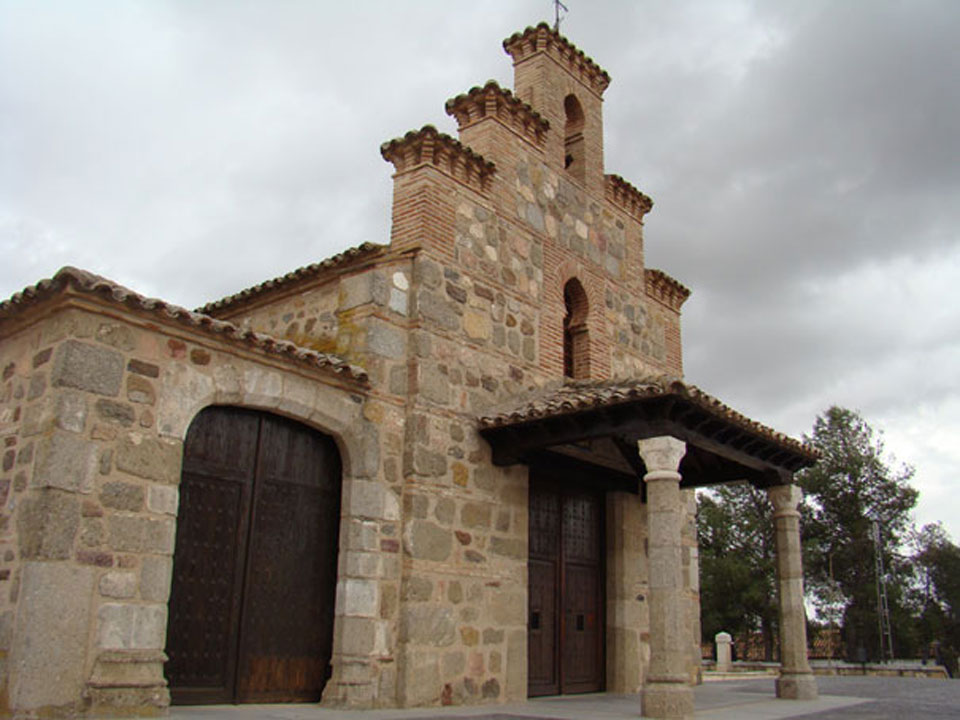 About 14 kilometers we enter the municipality of Galvez, from which the Mudejar coffered ceiling and the tower of the parish church San Juan Bautista stands out, also mention the existence of an ancient Jewish quarter with a synagogue that disappeared with the expulsion of the Jews 1492. From Galvez, the road leads to the town of Navahermosa, city of contrasts that mixes old and modern achieving a perfect harmony. In it, the pilgrims can visit the Parish of San Miguel Archangel; Ermita de San Sebastian; the Chapel of Our Lady of the Miracle "La Milagra" situated in the mountains surrounding the village; Dos Hermanas Castle, a fortress built in the early thirteenth century. The road runs through the town and 3 km to the left, the Old Bridge Majadillas so often crossed the pilgrims heading to Guadalupe is observed.

Continue the route to Los Navalmorales, municipality until 1835 was made up of two distinct populations, Navalmoral de Pusa and Navalmoral of Toledo. Proof of this is that today is formed by two large districts, divided by the constant stream of Navalmorales stream. After visiting the Parish of Our Lady of Antigua we went to Cerro Santo, wherein the latches Ermita San Sebastián and from where we can enjoy the magnificent views of the Sierra de Gredos, the Tagus Valley and Montes de Toledo. 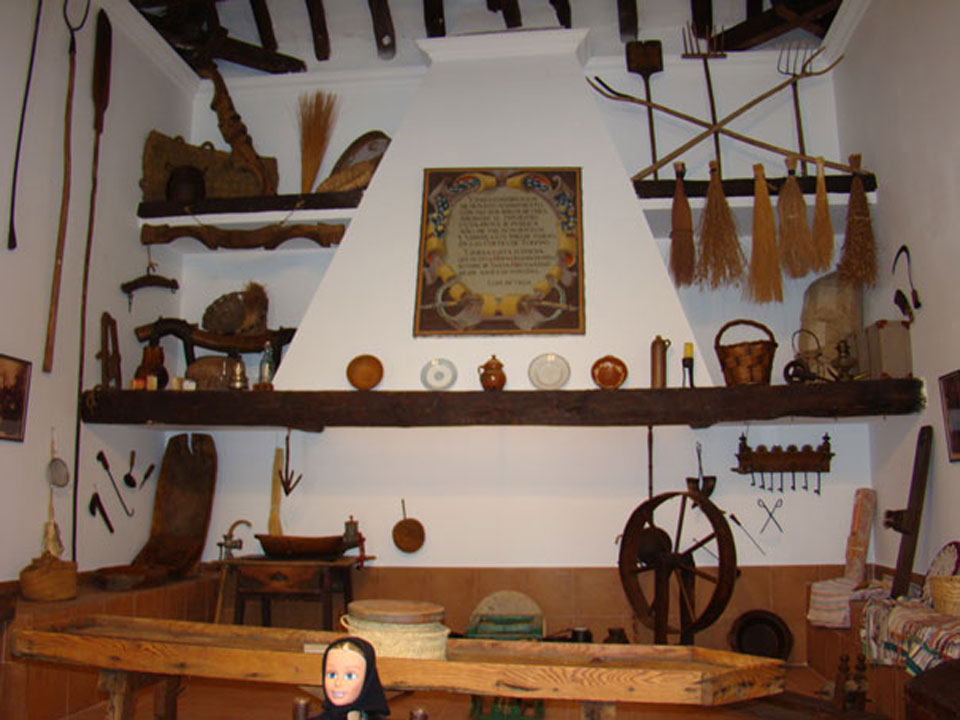 Straying from the path and take the road CM- 4102 can also visit the town of San Martin de Pusa , with its Church of San Martin Bishop , the Christ Chapel of Valdelpozo and palladium t of the former lords of Valdepusa . At just 8 kilometers from the town Villarejo de Montalbán welcomes us with its scenic and architectural heritage , highlighting the Roman Bridge and the parish church in honor of Our Lady of Peace.

Returning to the CM- 4102 entered San Bartolome de las Open , highlighting the Parish of St. Bartholomew the Apostle and stately buildings such as the Parish House or the House Gethsemane . After this visit we take the CM- 4101, towards Santa Ana de Pusa , where pilgrims can visit the Ethnographic Museum " The Canchar " , the Mill and the Bridge of Pusa . This is where our Montes de Toledo District leaves the pilgrim asked it to continue the route in order to conclude this Camino Guadalupe. 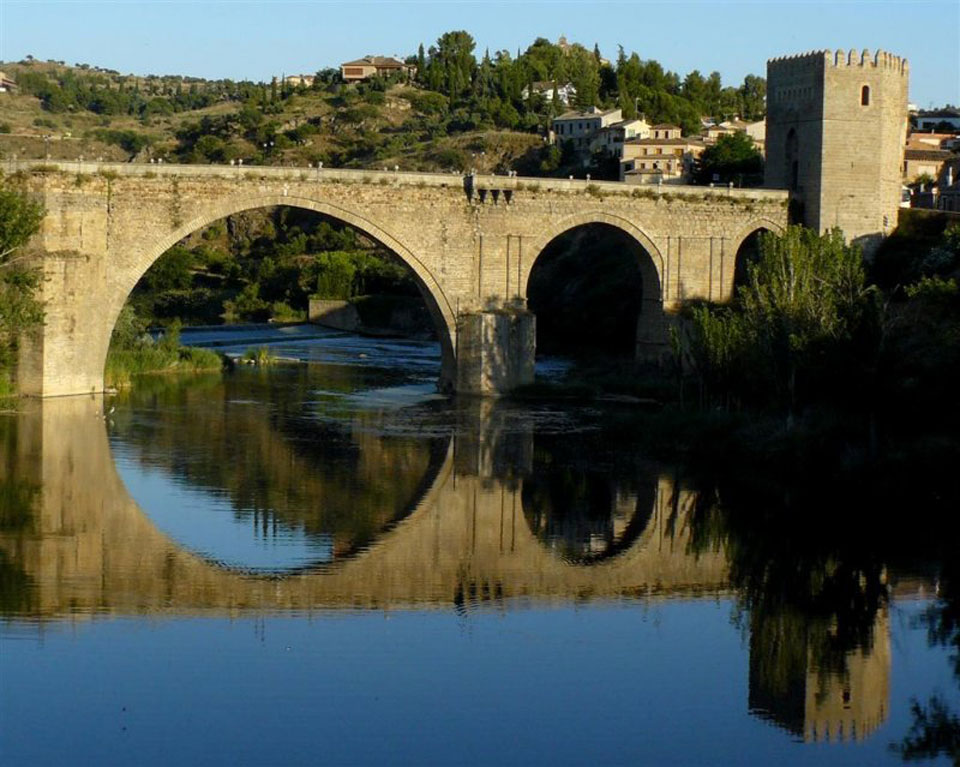 The pilgrim route continues on the N -401 road to Alcaudete de la Jara , there taking the N -502 arrived at La Nava de Ricomalillo . We continue to catch the Cam de la Jara , the Port of San Vicente , where we cross to Extremadura , continue to Alia order to reach our destination, Real Monasterio Guadalupe and Our Lady of Guadalupe. Sanctuary of the Patroness of Extremadura , artistic historical gem in 1993 deserved to be considered and taken as a World Heritage Site , the monastery and its Virgen Morena has to his credit more than seven centuries of history and life.