In the thirteenth century , Toledo Ajofrín started a road that began at the Bridge of Alcantara , to take towards the Guadiana basin and Andalusia. Also from this town , then a farmhouse repopulated by Mozarabic , journeyed other cross roads linking the main roads that ran from north to south across the Montes de Toledo. One coming out of Ajofrín Addressing Sales with Aguilera Pena where it crossed the road from Toledo to Cordoba and continuing until connecting with another ancient Roman road near Port Marches , was the protagonist of a tradition preserved for centuries in the villages of the region .

A medieval tradition of our region maintains that in 1262 a shepherd Magdaleno known for taking care of their cattle on the Mount of La Morra , where today the town of San Pablo de los Montes gets up , went to the place where mysterious lights shone insistently , discovering between the clear waters of a fountain , the statue of Our Lady of Grace, a tiny figure of a height of about 5 cm . 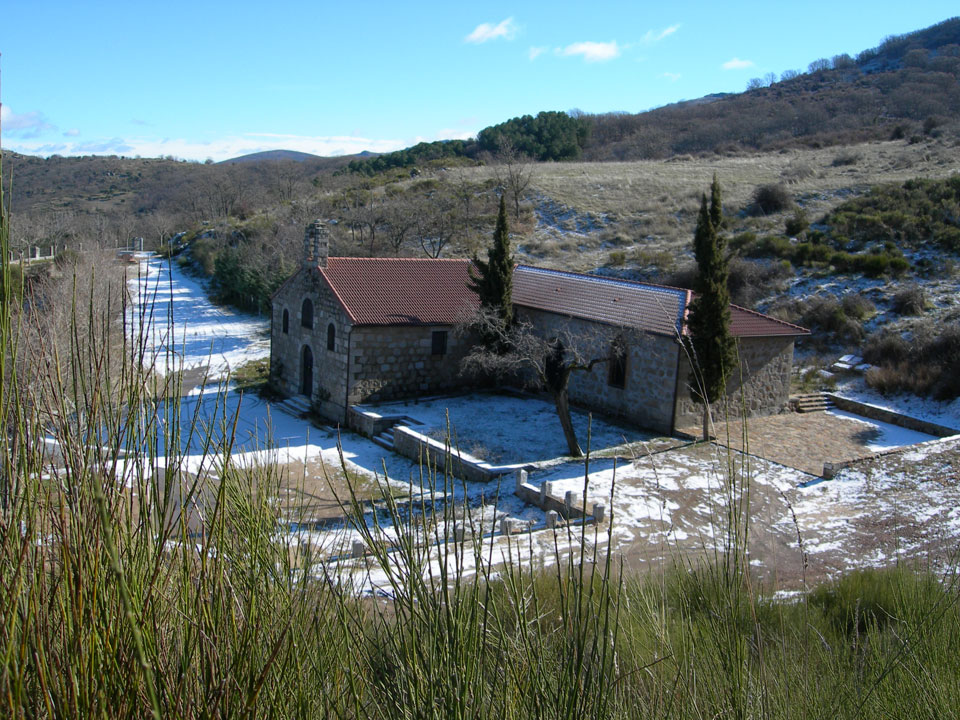 Obeying the mandate of the image to the place a sanctuary was built, he narrated the event to the people of the neighboring villages. It was in Ajofrín when neighbors, believing the words of the pastor, marched with him, walking the seven miles that separated them from the source.

On the source, the ajofrineros erected a small shrine, with Magdaleno her guardian and first hermit. Ajofrín neighbors declared its employer image and vowed to return every year to this place where past time would build a convent of Augustinian, guardians of the image.

For over 700 years the residents of all the nearby villages made their way up the confiscation of Mendizabal, when this in the convent had to be abandoned and the image placed in the parish of Ajofrín, where he disappeared after the Civil War in 1936 .

Currently the route, which runs for approximately 45 kilometers, can be done by road or by the ancient pilgrimage path known as "Camino del Pastor Magdaleno". 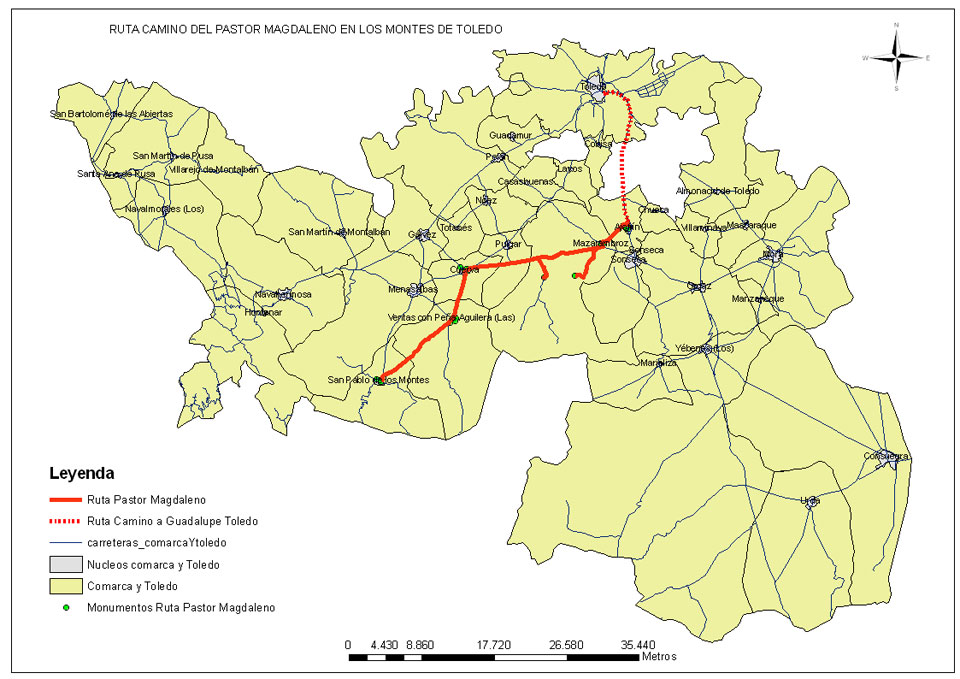 Brand as the medieval tradition begins in the town of Ajofrin, telling this with a rich architectural heritage. In the Parish Church of St. Mary Magdalene Mudejar Gothic Revival transition to the XV and XVI he stands. The Strong House of the lords of Ajofrín with two towers, the Convent of the Dominican Recollect the seventeenth century, the pillory at the entrance of the town by way of Toledo and the Museo de Jacinto Guerrero located at City Hall.

The route continues through the town of Mazarambroz, in which even the crosses that mark the ancient pilgrimage path is contemplated. Roll of Justice noted in the Plaza del Ayuntamiento, the parish church of Our Lady of the Assumption with coffered ceiling of the sixteenth century. The Castle is a tower guarding the steps of the mountains, mainly known as Vereda de la Gitana. About 5 kilometers from the town and close to the route, there are the ruins of the largest Roman Spain Dam (Dam Raceway) built supply Toledo. Close to this dam, and within the Finca El Castanar located at the end of Mazarambroz you can see the Palace of El Castanar, eclectic and historicist style, privately owned. In this same building there are also the ruins of an ancient Franciscan convent where vivi6 Cisneros. The road elapses for different ecosystems, cultivated fields, pastures, woods and riverside forests.

We continue through the town of Cuerva in which we find the Parish Church of St. James family pantheon of Garcilaso de la Vega, where you can see the graves of some of its members. In the chapel of the relics there is a canvas of Luis Tristan, a disciple of El Greco. Convent of the Discalced Carmelites, the Shrine of Our Lady of Remedies and the Oratory of Our Lady of Grace are required stop for pilgrims. Highlight finally the Castle of Peñaflor and Justice Roll up on the old road to Toledo and the College of scribes, former palace of the Counts of Arcos. 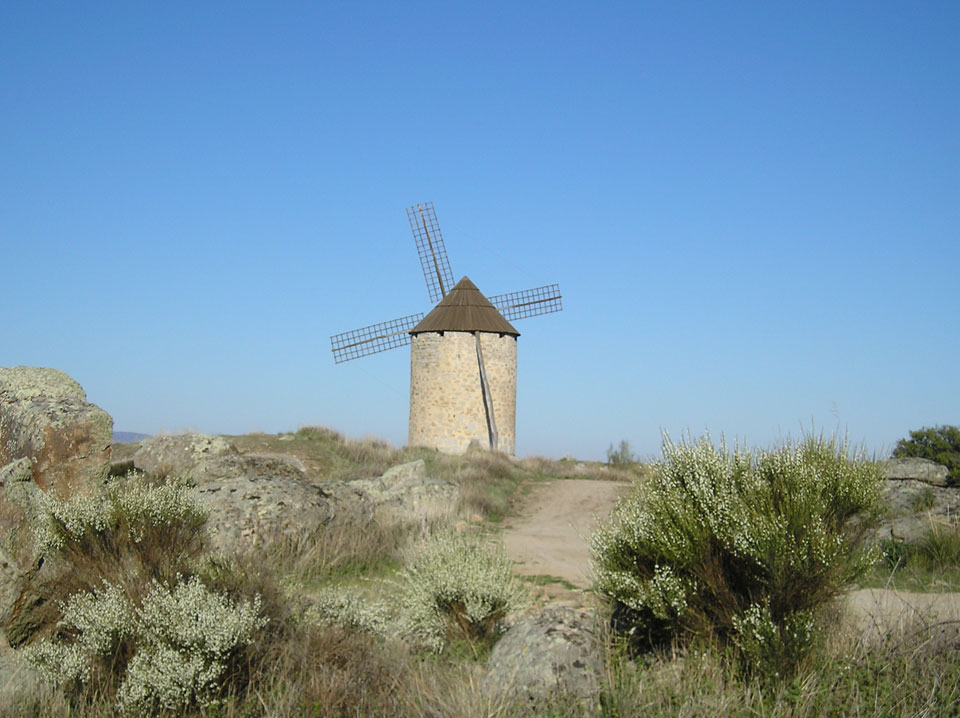 About 10 kilometers of Cuerva we find Las Ventas con Pena Aguilera, city center Montes de Toledo District. Located on top of Cerro del Aguila are the Shrine of Our Lady of the Eagle and the Windmill. In the center of town the Church of St. Peter the Apostle, it rises with Moorish tower of the fifteenth century. Continuing Valley Chorrito the remains of the Tower of the Moors tell us that once the Muslims used to monitor the path of Cordoba. Leaving the town by the Royal Gorge Rioja, in the harbor of the Miracle, the Hermitage of Santa Lucia, highlighting her a Roman fountain in one of its facades rises.

The route ends in San Pablo de los Montes, municipality together with the natural and scenic beauty, rich heritage plays a very important role. The Conversion of St. Paul Parish Church with Mudejar tower of the fifteenth century, inside are preserved reconstructed part of the cloisters of the Augustinian convent, whose nearby ruins rise on another Visigoth, Convent of the Augustinian Fathers. In the vicinity a former Pozo de Nieve, and the Chapel of Our Lady of Grace or Holy Source, within which the source where the pastor Magdaleno found the image of Our Lady of Grace is preserved.